Exhumed from obscurity, Princess Sophia Duleep Singh (1876-1948) is celebrated in Anita Anand’s ambitious but often-didactic biography, Sophia–Princess, Suffragette, Revolutionary. The youngest daughter of Maharajah Duleep Singh—robbed of his kingdom when he was a child and brought to England at age 15—and the granddaughter of the “Lion of Punjab,” Maharajah Ranjit Singh, Sophia was born and raised in exiled English comfort and royal lavishness.

Because of her exotic heritage and because her godmother was Queen Victoria, Sophia was internationally known as one of the “Duleep Singh Princesses.” Her life as a socialite was fulfilling but only insofar as party-going, wearing the latest Paris fashions, and raising champion show dogs; she was never considered marriageable because of the color of her skin. 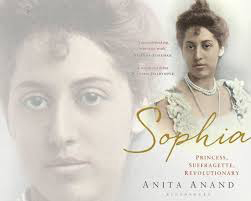 Nevertheless, she was her own woman, boldly devoted to the new rage of cycling, photography, and, to her family’s dismay, smoking. For all the pleasure Sophia experienced in English society, though, it is clear she lived with equal parts of loneliness and depression that receded when a sibling required her help or companionship.

One British newspaper called her a “thoroughly English girl,” yet she was always searching for purpose in life to seal the society-imposed gaps. Allowed to visit India for the first time in 1903, she saw “poverty and depravation on a scale that overwhelmed her. Also, she came face to face with all that her family had lost.” The realism that kills the debutante gives birth to the revolutionary, and Sophia would never be a carefree socialite again. [Read More]