Skip to content
The Last Laugh • Yes, My Accent Is Real: And Some Other Things I Haven’t Told You by Kunal Nayyar. Atria Books, An Imprint of Simon & Schuster, Inc.: New York. September 2015. Available as hard cover, e-book, unabridged audio download,and unabridged CD. 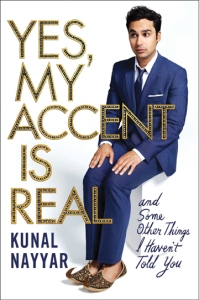 Russell Peters, Mindy Kaling, Aziz Ansari. They are comedians and comedic actors of Indian background who have written books. Now, it’s Kunal Nayyar’s turn. The actor who plays astrophysicist Raj Koothrappali on the hit CBS sitcom The Big Bang Theory freely and openly takes the reader on a ride—bumps and all—in his collection of over 30 personal essays titled Yes, My Accent Is Real: And Some Other Things I Haven’t Told You.

From his childhood in New Delhi (but he’ll point out that he was “Made in England”) to his college days at the University of Portland to marrying his wife Neha Kapur (Miss India 2006, “My Big Fat Indian Wedding”), Nayyar neither uses the book to promote himself as a Hollywood fixture nor sets himself up on a pedestal. Rather, he reveals a man who stumbled now and then, felt the full spectrum of emotions, and carried on like any other person whose sights are set on getting it right no matter the chosen profession. [Read More]