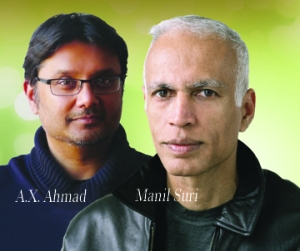 Manil Suri, author of Death of Vishnu, The Age of Shiva, and City of Devi  and A.X. Ahmad, author of The Caretaker (IC, September 2013) and the recently-released The Last Taxi Ride (Books one and two of the Ranjit Singh Trilogy), first met at one of Suri’s evening readings. They chatted politely despite being famished. When both confessed their hunger, they ended up becoming friends over dinner. This conversation of literary minds took place at Suri’s home, where they sat at his dining table and transported themselves to India via their conversation about Bollywood’s influence on society, their lives, and their writing. [Read More]